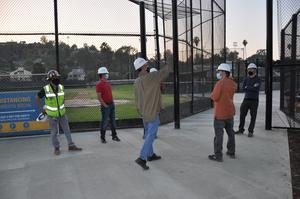 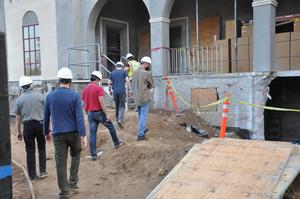 On Monday, October 19, the Measure SP Citizens Oversight Committee toured two major SPUSD construction projects near completion. The SPHS Athletics Facility Project will open for students and teams at the beginning of November. Highlights include a brand new field house, new tennis courts, new batting cages, new bleachers for the football field, and new outdoor basketball courts. There are also renovations to the main and practice gym including the main entrance, locker rooms, team rooms, offices, and storage areas.
The group also toured the SPMS Old Gymnasium project which is scheduled to be completed in early January 2021. Featuring a black box theater, an art classroom and flex lab, the project has remained true to its goal of preserving the historic nature of the building.
The oversight committee’s purpose is to inform the public about the expenditure of bond proceeds, to review expenditure reports produced by the District, to ensure that bond proceeds were expended for the purposes as set forth in Measure SP, and to present to the Board of Education an annual report indicating whether the District is in compliance with state requirements. Measure SP, passed in 2016, allows for $98 million in bonds to fund necessary improvements for the schools. Every school site has seen improvements from new and modernized buildings to safer campuses.
Thank you to the Measure SP Citizens Oversight committee including Chair Dean Serwin, Vice Chair Traci Fleming, Members Felicito Cajayon, Scott Kuhn, Joe Loo, Scott Moe, and Steven Norris for serving in this important role.
For more information, contact: South Pasadena Unified School District, Office of the Superintendent, scarroll@spusd.net.